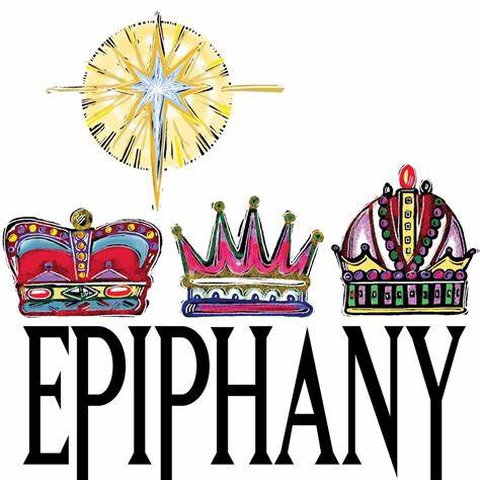 1Arise, shine; for your light has come,
and the glory of the LORD has risen upon you.
2For darkness shall cover the earth,
and thick darkness the peoples;
but the LORD will arise upon you,
and his glory will appear over you.
3Nations shall come to your light,
and kings to the brightness of your dawn.

4Lift up your eyes and look around;
they all gather together, they come to you;
your sons shall come from far away,
and your daughters shall be carried on their nurses’ arms.
5Then you shall see and be radiant;
your heart shall thrill and rejoice,
because the abundance of the sea shall be brought to you,
the wealth of the nations shall come to you.
6A multitude of camels shall cover you,
the young camels of Midian and Ephah;
all those from Sheba shall come.
They shall bring gold and frankincense,
and shall proclaim the praise of the LORD.

1I, Paul, am a prisoner for Christ Jesus for the sake of you Gentiles - 2for surely you have already heard of the commission of God’s grace that was given me for you, 3and how the mystery was made known to me by revelation, as I wrote above in a few words, 4a reading of which will enable you to perceive my understanding of the mystery of Christ. 5In former generations this mystery was not made known to humankind, as it has now been revealed to his holy apostles and prophets by the Spirit: 6that is, the Gentiles have become fellow-heirs, members of the same body, and sharers in the promise in Christ Jesus through the gospel.

7Of this gospel I have become a servant according to the gift of God’s grace that was given me by the working of his power. 8Although I am the very least of all the saints, this grace was given to me to bring to the Gentiles the news of the boundless riches of Christ, 9and to make everyone see what is the plan of the mystery hidden for ages in God who created all things; 10so that through the church the wisdom of God in its rich variety might now be made known to the rulers and authorities in the heavenly places. 11This was in accordance with the eternal purpose that he has carried out in Christ Jesus our Lord, 12in whom we have access to God in boldness and confidence through faith in him.

1In the time of King Herod, after Jesus was born in Bethlehem of Judea, wise men from the East came to Jerusalem, asking, 2‘Where is the child who has been born king of the Jews? For we observed his star at its rising, and have come to pay him homage.’ 3When King Herod heard this, he was frightened, and all Jerusalem with him; 4and calling together all the chief priests and scribes of the people, he inquired of them where the Messiah was to be born. 5They told him, ‘In Bethlehem of Judea; for so it has been written by the prophet:

6“And you, Bethlehem, in the land of Judah, are by no means least among the rulers of Judah; for from you shall come a ruler who is to shepherd my people Israel.”’ 7Then Herod secretly called for the wise men and learned from them the exact time when the star had appeared. 8Then he sent them to Bethlehem, saying, ‘Go and search diligently for the child; and when you have found him, bring me word so that I may also go and pay him homage.’ 9When they had heard the king, they set out; and there, ahead of them, went the star that they had seen at its rising, until it stopped over the place where the child was. 10When they saw that the star had stopped, they were overwhelmed with joy. 11On entering the house, they saw the child with Mary his mother; and they knelt down and paid him homage. Then, opening their treasure-chests, they offered him gifts of gold, frankincense, and myrrh. 12And having been warned in a dream not to return to Herod, they left for their own country by another road.

This is a reflection for Epiphany.

Today we are celebrating the Epiphany, which actually falls on January 6th, this coming Wednesday. Today we focus on the Wise Men, and their discovery of the infant Christ. Epiphany means “a moment of sudden and great revelation”, a title which refers to that discovery – the revelation of the Christ to the Gentiles. But when I was reflecting upon this story, I had a revelation – an epiphany – of my own.

What I discovered is that the story of the Wise Men is not actually about the Wise Men at all. Perhaps that’s why we know so little about them. There are many traditions that have grown up around them over the years – they are sometimes assumed to be Kings, we assume that there are three of them because they present the infant Christ with three gifts of gold, frankincense and myrrh, and they have even acquired names – Gaspar, Balthazar, Melchior – which you can see in the stained glass window in the chancel.

The truth is, however, all we definitely know about them is that there was more than one of them – they are always referred to in the plural – and the word that is used to name them – Magi – indicates that they were priests of the Zoroastrian religion. This religion, which arose in Persia during the tenth century BC, was founded by a man named Zarathushtra, who would have been roughly contemporary with the Biblical Kings of David and Solomon. Zarathushtra was also of the first people in history to preach what is now called ‘eschatology’ – teaching about the ‘end times’ – the judgement of the God, and what happens after. As part of that, Zarathushtra preached that he himself would return to earth three times, at thousand year intervals, and that each time he would be the son of a virgin. The Magi, then, were in Palestine searching for their own promised Messiah. Perhaps they believed that they found him.

But that’s actually, I think, what the story is about. Not the Magi themselves, but their search – everyone’s search. In first-century Palestine, there were many people searching for a promised Messiah. Some of those who were searching found him, and we will hear some of their names over the next few weeks: Simeon, Anna, Simon, James, John, Andrew…

But here in this story, we also have a search that failed. Herod was king of the Jews only by Roman mandate; he was unpopular with his own people, politically unstable, personally weak and blinded by his own greed for power. Thus, presented with an opportunity to seek and find the promised Messiah, Herod utterly failed to grasp what was in front of him. His own response was a knee-jerk reaction of unparalleled brutality, a misjudged attempt to destroy the Messiah which missed completely, and probably contributed to further destabilising his own grasp on power. He wasn’t the only one who failed to grasp it. Three decades later, Caiaphas the High Priest would spectacularly fail to recognise what was in front of him. The Roman emperors Nero, Decius, Valerian and Diocletian tried their best to stamp out the followers of Jesus, with a monumental lack of success that lead ultimately to the conquest of their empire from within. Midway through the second century, many Jews threw themselves behind Simon Bar Kokhba, who declared himself to be the Messiah and led an uprising against the Romans which resulted in the total destruction of Jerusalem and the expulsion of the Jews from their Promised Land.

This then is the point of the story, I think. Even today, how many are seeking their Messiah, searching for the easy answers to their problems, and either look in the wrong places, or don’t recognise him when they see him? And what are we doing to help them? How can we, who have found the Messiah, provide that epiphany to others?

Prayers of intercession during Epiphany

We pray for the coming of God’s kingdom.

You sent your Son to bring good news to the poor,

sight to the blind,

freedom to the captives

and salvation to your people:

anoint us with your Spirit;

rouse us to work in his name.

Send us to bring help to the poor

and freedom to the oppressed.

Send us to tell the world

the good news of your healing love.

Send us to those who mourn,

to bring joy and gladness instead of grief.

Send us to proclaim that the time is here

for you to save your people.

Father, use us, unworthy as we are,

to bring in your kingdom of mercy, justice, love and peace.

Empower us by your Spirit and unite us in your Son,

that all our joy and delight may be to serve you,

now and for ever.