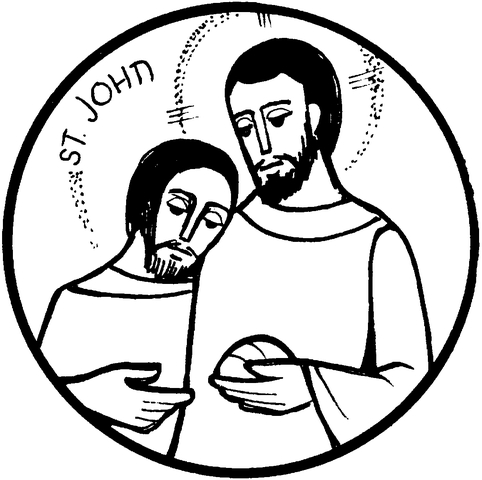 5This is the message we have heard from him and proclaim to you, that God is light and in him there is no darkness at all. 6If we say that we have fellowship with him while we are walking in darkness, we lie and do not do what is true; 7but if we walk in the light as he himself is in the light, we have fellowship with one another, and the blood of Jesus his Son cleanses us from all sin. 8If we say that we have no sin, we deceive ourselves, and the truth is not in us. 9If we confess our sins, he who is faithful and just will forgive us our sins and cleanse us from all unrighteousness. 10If we say that we have not sinned, we make him a liar, and his word is not in us.

24This is the disciple who is testifying to these things and has written them, and we know that his testimony is true. 25But there are also many other things that Jesus did; if every one of them were written down, I suppose that the world itself could not contain the books that would be written.

This feels like a very strange Christmas season – the last 9-10 months have been unlike anything I have ever experienced and as I look back I have been meditating on how God uses unexpected situations in our lives to both draw us and others closer to himself.

Mary, Jesus’s mother, was a young woman, when she became pregnant with her first born son. An unexpected pregnancy, before her marriage, could have at worse, led to her own death by stoning, and at best, becoming a mother, due to an unplanned pregnancy, has the effect of changing anyone’s life and outlook.

Mary’s “Yes” was a critical moment. This peasant girl, from a backwater town in Roman occupied Israel, was to be part of a change in the whole of history. Jesus’s life and death and resurrection and the impact he had on those around him, and those who became those first disciples and apostles and supporters, whether in the open, or quietly like Nicodemus and Joseph of Arimathea. Each person had to make a conscious turn towards God and to say “Yes” to a relationship that can redefine our lives and our priorities.

For each of us, 2020 has been a year which has forced us to look at our lives, to see what really matters in all the clutter. I have certainly had to spend time cultivating friendships in new ways – over the phone rather than in-person visits; Zoom (which was something I had never heard of before this year) and Skype. I even started handwriting letters again to friends far away and sending little notes and cards to help cheer people up when they were struggling.

All through the Bible there are characters whose lives have taken very different turns to that, which they might have imagined – Joseph wouldn’t have ever expected to end up in Egypt, even with all his fantastic dreams. David as a Shepherd boy and youngest son, wouldn’t have ever dreamed of reigning over the Israelite Kingdom whilst tending the flocks in the fields, and while Zachariah and Elizabeth may have longed for a son, the revelation in the Temple and the importance of the message that their son John would bring, was one that would have changed their lives in unexpected ways.

I believe our role, is to take the opportunities afforded to us, we never know when what seems like a small decision to us, might make a huge difference to someone else. It has been strange, to not be able to experience worship in church very often this year, but I have gained so much worshipping online with different communities, seeing how other churches worship; learning new songs and hymns and gaining new friends in the process. Working from home has also afforded me opportunities to work more creatively and to better be able to juggle my paid employment; my family and my Reader role.

My prayer for us all is that as we celebrate the coming of the Christ child into the world, that we too might be open to the working of God in our lives – and to be able to respond “yes” to whatever he might ask of us in the coming year.

Rejoicing in the love and life of God made visible among us,

let us pray to Jesus, the only-begotten Son.

your beloved disciple John has brought us your living word,

inspire all evangelists and teachers to build up your Church.Especially we pray for our bishops Christopher and John that they may lead us in faith at these times of difficulty.

Light of the world,

illuminate the dark places of this world,

where sin, violence and death cast their shadow over human lives,We pray for those for whom war and famine have made this year even more difficult.May they find peace and food to eat throughout the coming year.

Door of the sheepfold,

protect all who are in trouble or danger,

and give grace to our loved ones, families and friends.We pray for those fearful of Covid19, for those rolling out the vaccine to our population and for those struggling to provide care in our hospitals as well as patients themselves.

minister to all who are lost, misguided or without faith;

bind up the broken, and give rest to the weary.Give to those who are ill the light of hope and to those who watch with them, courage in adversity.

Resurrection and the life,

raise us up at the last day

with all who have gone before us in faith, especially Mary Burdett,

with those whom we love but see no longer,

with John and all your saints,

that in your Father’s house we may come to the place you have prepared for us.

Incarnate Lord, accept these our prayers

for the sake of your most holy name.