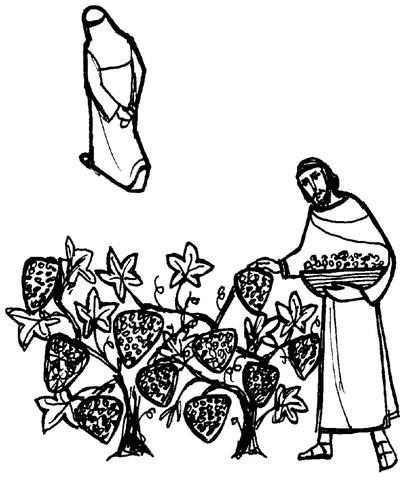 1From the wilderness of Sin the whole congregation of the Israelites journeyed by stages, as the LORD commanded. They camped at Rephidim, but there was no water for the people to drink. 2The people quarrelled with Moses, and said, ‘Give us water to drink.’ Moses said to them, ‘Why do you quarrel with me? Why do you test the LORD?’ 3But the people thirsted there for water; and the people complained against Moses and said, ‘Why did you bring us out of Egypt, to kill us and our children and livestock with thirst?’ 4So Moses cried out to the LORD, ‘What shall I do with this people? They are almost ready to stone me.’ 5The LORD said to Moses, ‘Go on ahead of the people, and take some of the elders of Israel with you; take in your hand the staff with which you struck the Nile, and go. 6I will be standing there in front of you on the rock at Horeb. Strike the rock, and water will come out of it, so that the people may drink.’ Moses did so, in the sight of the elders of Israel. 7He called the place Massah and Meribah, because the Israelites quarrelled and tested the LORD, saying, ‘Is the LORD among us or not?’

1If then there is any encouragement in Christ, any consolation from love, any sharing in the Spirit, any compassion and sympathy, 2make my joy complete: be of the same mind, having the same love, being in full accord and of one mind. 3Do nothing from selfish ambition or conceit, but in humility regard others as better than yourselves. 4Let each of you look not to your own interests, but to the interests of others. 5Let the same mind be in you that was in Christ Jesus,6who, though he was in the form of God,
did not regard equality with God
as something to be exploited,7but emptied himself,
taking the form of a slave,
being born in human likeness.
And being found in human form,8he humbled himself
and became obedient to the point of death –
even death on a cross. 9Therefore God also highly exalted him
and gave him the name
that is above every name,10so that at the name of Jesus
every knee should bend,
in heaven and on earth and under the earth,11and every tongue should confess
that Jesus Christ is Lord,
to the glory of God the Father.

12Therefore, my beloved, just as you have always obeyed me, not only in my presence, but much more now in my absence, work out your own salvation with fear and trembling; 13for it is God who is at work in you, enabling you both to will and to work for his good pleasure.

23When Jesus entered the temple, the chief priests and the elders of the people came to him as he was teaching, and said, ‘By what authority are you doing these things, and who gave you this authority?’ 24Jesus said to them, ‘I will also ask you one question; if you tell me the answer, then I will also tell you by what authority I do these things. 25Did the baptism of John come from heaven, or was it of human origin?’ And they argued with one another, ‘If we say, “From heaven,” he will say to us, “Why then did you not believe him?” 26But if we say, “Of human origin,” we are afraid of the crowd; for all regard John as a prophet.’ 27So they answered Jesus, ‘We do not know.’ And he said to them, ‘Neither will I tell you by what authority I am doing these things.

28What do you think? A man had two sons; he went to the first and said, “Son, go and work in the vineyard today.” 29He answered, “I will not”; but later he changed his mind and went. 30The father went to the second and said the same; and he answered, “I go, sir”; but he did not go. 31Which of the two did the will of his father?’ They said, ‘The first.’ Jesus said to them, ‘Truly I tell you, the tax-collectors and the prostitutes are going into the kingdom of God ahead of you. 32For John came to you in the way of righteousness and you did not believe him, but the tax-collectors and the prostitutes believed him; and even after you saw it, you did not change your minds and believe him.’

Who Died and Made You King?

“Who died and made you king?”

That’s a phrase I heard a lot in my childhood. Maybe it’s not so well known in the Midlands, but try to imagine it delivered in a thick ‘valleys’ accent, with a hint – and sometimes more than a hint – of sarcasm. Or exasperation. The implication was always, “Who do you think you are, doing that?”

“Who died and made you king?” In other words, the very question the chief priests and elders ask Jesus in our gospel reading for today: “By what authority are you doing these things, and who gave you that authority?”

Authority is a very important concept for human beings. When people act in an official capacity, we like to know who set them where they are – who decided that they have the right to do what they do? As a teacher, I have certificates outlining my several qualifications – my degree, my teacher training, the various courses I have attended over the course of my career, my license to physically restrain young people. As a Reader, I hold a licence from the Bishop, as a symbol that I am acting with his authority. Police officers have their warrant cards. Drivers must hold a full driving licence. Publicans must display their alcohol licence clearly. Yes, we are very keen on authority, on knowing who allows a particular action to take place – and it seems that two thousand years ago, it was no different. Jesus is preaching and teaching, and his teachings seem at times to go very much against the orthodoxy of the day; so the priests and the elders want very much to know just who this vagabond Galilean upstart thinks he is.“By what authority are you doing these things, and who gave you that authority? ”“Who died, and made you king?”

Of course, from our perspective, two millennia down the line, we know the answer to that one. But Jesus can hardly announce to the elders that his authority comes from himself, that the death which makes him king is his own! They probably wouldn’t have understood it, and definitely wouldn’t have accepted it! No, instead, Jesus answers them with a counter-question, a favourite trick of his, which he uses to get his audience to work out the truth for themselves. “Where did John’s authority come from?” he asks, referring to John the Baptist. The Baptist had equally been a thorn in the flesh of the government of the day – and had lost his head for it – and by invoking him, Jesus presents his accusers with a dilemma. Do they say that John’s authority was God-given, or bestowed by mere humans? Either answer will lead to unpalatable implications, so they are forced to choose neither, and do not answer. Jesus then throws their cowardice back into their faces, by similarly refusing to answer the question they put to him. He will not tell them by whose authority he acts, because they do not deserve to know. Instead, then, he tells them a parable – a man had two sons, asking them both to help in his vineyard. One says, “No, I won’t” – but then changes his mind and does. The other says, “Yes, I will” – but, for whatever reason, does not. Jesus is making a comparison here between the sinners – who go their own way but then repent and come back to God – and the elders themselves, who claim to follow God’s way but in reality fall far short without ever realising that they do. The elders don’t get it – they don’t get the answer to the question, and they don’t get Jesus to fall into the trap they are trying to weave for him. Jesus understands them far better than they understand him.

I said earlier that the elders were asking, effectively, a variation on a question I heard a lot in my childhood. That they were asking it two thousand years ago shows us that for all our technological progress, human nature hasn’t changed very much since the time of Jesus. It is this above all that enables Jesus to speak to us, to teach his parables to us, and not just to that audience so long ago. We are the same, so his teachings remain very relevant to our lives. The question the elders ask Jesus – ““By what authority are you doing these things, and who gave you that authority?” – is the question we must decide on the answer to. The world thinks that it knows the answer – and finds the Christian church easy to dismiss, as an archaic relic with no place in a modern scientific world.

Heavenly Father, you promised through your Son Jesus Christ to hear us when we pray in faith.

Creator God we pray for our world; a world in need of greater tolerance; a world where people of all ages care constantly about others' needs and creeds. We pray that nobody is undervalued because of colour and sexual orientation. We pray for all leaders, that their decision-making is guided by justice and without personal gain.

Gracious God we pray for our country; for all in government charged with reducing the impact of coronavirus on everyone's health, both physical and mental. We pray for those who are self-isolating and those who live alone. We pray for all those whose work puts them in greater danger, for the medical staff in hospitals, care homes and hospices and the scientists seeking solutions to the pandemic.

Holy God we pray for your Church, its bishops, clergy, chaplains and Readers. May we never lose faith in you despite the restrictions on our worship. Keep us mindful of others and ready to reach out to those in need. We give thanks for our families and friends.

Loving God we pray for all those who need healing in body, mind or spirit. Despite any pain and distress keep them safe and aware of your love.

Merciful Father your love reaches beyond the grave. At the end of our days be with us and with those we love, and those we have loved and gone before. We pray for all those who have recently died and those bereaved by their passing.

As we go about your world, the world you created Lord, may our Harvest giftsat this time remind us of all you are and all you provide.

Merciful Father accept these prayers for the sake of your Son, our Saviour Jesus Christ. Amen.

This weeks readings, thought for the day, intercessions etc ...... more