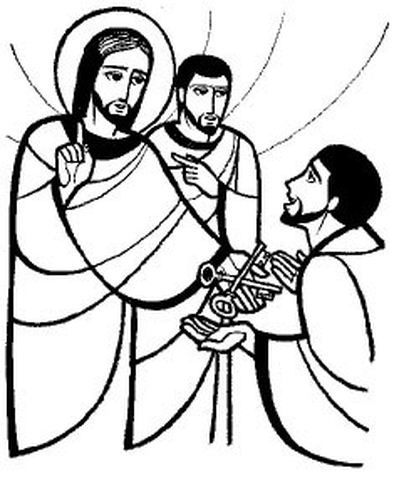 8Now a new king arose over Egypt, who did not know Joseph. 9He said to his people, ‘Look, the Israelite people are more numerous and more powerful than we. 10Come, let us deal shrewdly with them, or they will increase and, in the event of war, join our enemies and fight against us and escape from the land.’ 11Therefore they set taskmasters over them to oppress them with forced labour. They built supply cities, Pithom and Rameses, for Pharaoh. 12But the more they were oppressed, the more they multiplied and spread, so that the Egyptians came to dread the Israelites. 13The Egyptians became ruthless in imposing tasks on the Israelites, 14and made their lives bitter with hard service in mortar and brick and in every kind of field labour. They were ruthless in all the tasks that they imposed on them.

15The king of Egypt said to the Hebrew midwives, one of whom was named Shiphrah and the other Puah, 16‘When you act as midwives to the Hebrew women, and see them on the birthstool, if it is a boy, kill him; but if it is a girl, she shall live.’ 17But the midwives feared God; they did not do as the king of Egypt commanded them, but they let the boys live. 18So the king of Egypt summoned the midwives and said to them, ‘Why have you done this, and allowed the boys to live?’ 19The midwives said to Pharaoh, ‘Because the Hebrew women are not like the Egyptian women; for they are vigorous and give birth before the midwife comes to them.’ 20So God dealt well with the midwives; and the people multiplied and became very strong. 21And because the midwives feared God, he gave them families. 22Then Pharaoh commanded all his people, ‘Every boy that is born to the Hebrews you shall throw into the Nile, but you shall let every girl live.’

1Now a man from the house of Levi went and married a Levite woman. 2The woman conceived and bore a son; and when she saw that he was a fine baby, she hid him for three months. 3When she could hide him no longer she got a papyrus basket for him, and plastered it with bitumen and pitch; she put the child in it and placed it among the reeds on the bank of the river. 4His sister stood at a distance, to see what would happen to him.

5The daughter of Pharaoh came down to bathe at the river, while her attendants walked beside the river. She saw the basket among the reeds and sent her maid to bring it. 6When she opened it, she saw the child. He was crying, and she took pity on him. ‘This must be one of the Hebrews’ children,’ she said. 7Then his sister said to Pharaoh’s daughter, ‘Shall I go and get you a nurse from the Hebrew women to nurse the child for you?’ 8Pharaoh’s daughter said to her, ‘Yes.’ So the girl went and called the child’s mother. 9Pharaoh’s daughter said to her, ‘Take this child and nurse it for me, and I will give you your wages.’ So the woman took the child and nursed it. 10When the child grew up, she brought him to Pharaoh’s daughter, and she took him as her son. She named him Moses, ‘because’, she said, ‘I drew him out of the water.’

I appeal to you therefore, brothers and sisters, by the mercies of God, to present your bodies as a living sacrifice, holy and acceptable to God, which is your spiritual worship. 2Do not be conformed to this world, but be transformed by the renewing of your minds, so that you may discern what is the will of God? what is good and acceptable and perfect.

3For by the grace given to me I say to everyone among you not to think of yourself more highly than you ought to think, but to think with sober judgement, each according to the measure of faith that God has assigned. 4For as in one body we have many members, and not all the members have the same function, 5so we, who are many, are one body in Christ, and individually we are members one of another. 6We have gifts that differ according to the grace given to us: prophecy, in proportion to faith; 7ministry, in ministering; the teacher, in teaching; 8the exhorter, in exhortation; the giver, in generosity; the leader, in diligence; the compassionate, in cheerfulness.

13When Jesus came into the district of Caesarea Philippi, he asked his disciples, ‘Who do people say that the Son of Man is?’ 14And they said, ‘Some say John the Baptist, but others Elijah, and still others Jeremiah or one of the prophets.’ 15He said to them, ‘But who do you say that I am?’ 16Simon Peter answered, ‘You are the Messiah, the Son of the living God.’ 17And Jesus answered him, ‘Blessed are you, Simon son of Jonah! For flesh and blood has not revealed this to you, but my Father in heaven. 18And I tell you, you are Peter, and on this rock I will build my church, and the gates of Hades will not prevail against it. 19I will give you the keys of the kingdom of heaven, and whatever you bind on earth will be bound in heaven, and whatever you loose on earth will be loosed in heaven.’ 20Then he sternly ordered the disciples not to tell anyone that he was the Messiah.

This is a reflection for the eleventh Sunday after Trinity.

In our gospel today, Jesus asks his disciples a question. And whenever Jesus asks a question, it is very important that we sit up and take notice – because he never asks anything trivial.At first glance, the question seems innocuous – “Who do you say that I am? ”We would not suppose that Jesus is simply fishing for complements – so we might assume that he is posing a test, to see how much insight his disciples have. This is an interpretation which is borne out by his comments to Peter at the end of our reading.

But we should also remember that Jesus’ questions are not simply for his disciples. They are for us, too. When Jesus asks Peter, “Who do you say that I am?” he is also asking us.

On the wall of my study, I have three very different pictures of Jesus. They come from a teaching resource pack I’ve had for many years, called ‘The Christ We Share’. I have them here:

The first one is called ‘Jesus Christ, Liberator’ (although it is often referred to now as ‘The Laughing Christ’).It was drawn some time around 1973 by a Canadian artist named Willis Wheatley, as a commission for theUnited Church of Canada. As you can see, it is a simple drawing, showing Jesus enjoying life. The second is called ‘The Lion of Judah’; it shows Jesus as a Masai warrior, emphasising his nobility, his strength and his simplicity. The third is a Balinese picture showing Jesus freeing Mary Magdalene from the demons that possessed her; Jesus appears in the aspect of ‘the Lord of the Dance’. This is an image which particularly speaks to me – “The Lord of the Dance” is one of my favourite hymns, and I find the idea of Jesus as a cosmic dancer to be an inspiring one.

There are no pictures of Jesus that were made during his lifetime. The oldest picture of him that we have is a wall painting in the Syrian city of Dura, which has been dated to 235AD.Likewise, there are no physical descriptions of Jesus. We talk a lot about the Humanity of Jesus, but we know almost nothing of what that Humanity was actually like. Was he tall or short? Dark or fair? Strapping or slight? Softly-spoken, or a booming bass? Serious or silly? A dancer, an artist, a fighter? Did he have a crooked smile, or a birthmark? Who, actually, was Jesus?

Because that’s the essence of his question. We have no authentic images of Jesus – so it is up to each of us to decide for ourselves who we think Jesus is. Each culture produces its own images of Jesus, because Jesus belongs to each culture and every culture. And since we as Christians are called to a personal relationship with Jesus, it is incumbent upon each of us to deal with Jesus, with his teachings and with his character, in our own personal way. Jesus asks each of us, in a completely individual and utterly heartfelt manner, “Who do you say that I am?”

How we answer that question is the essence of the relationship we have with him, and he with us – and is also the essence of what we share about him with others. Who is Jesus, for you?Who do you say he is?

Prayers of Intercession 23.8.20 by Malcolm Tyler

Creator God, keep your Church in strength and stability, by your promise that no evil shall prevail against it. At this time of pandemic may we all seek to encourage those who are struggling in whatever way. May we be zealous in our differing callings, to work in all things according to your will. Lord in your mercy…hear our prayer.

Lord, give to all people the desire to work together for good. For those in employment may you guide them to work for the benefit of their organisation and customers. For those with no employment may you help them to see value in themselves. As we work together, may we each come to know Christ as the Son of God. Lord in your mercy…hear our prayer.

Lord, bless us in our daily work and bless those with whom we work. Use in your service the abilities of all who live and work in this community. Especially we pray for Dmitry and myself but also for Barbara and John our wardens and other members of our PCC. Grant wisdom and discernment to those who are called to special responsibility. Lord in your mercy…hear our prayer.

Strengthen with hope those who think themselves of no worth. We remember those who recent examination results have caused them to wonder about their worth to society. Help us all to see that all people are of far more value to society than their examination results. Give us all light to understand our part in your purpose and grace to fulfil it. Lord in your mercy…hear our prayer.

We commend those who have died in the faith of Christ, true to the Church which he built. We recall not only those who have died recently but those also who have been instrumental in our own understandings of faith. Keep us constant in faith now and at the last. Merciful Father…Accept these prayers for the sake of your Son, our Saviour Jesus Christ. Amen