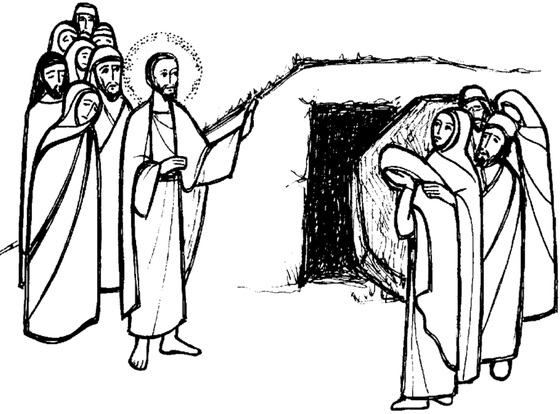 I hope that after a week of lock down you are finding the changes are becoming more bearable. Attached are readings prayers and thought for tomorrow. The thought is also available on the Facebook page and I have to apologise for being so unused to technology that I look and sound terrible. Read the thought if you can't stand to watch it!

Thank you too for all your kind messages both about what has been sent out already and your enquiries about Linda Hodgkiss. She is now home from hospital and so glad to hear of your prayers for her.

If you would like us to pray for any situation, do let us know.

I am sure you are holding all those involved on the front line of our health service in your prayers. Please remember Frances and her team in your prayers as one of her staff now has to self isolate with her whole family because of the virus. Needless to say through no-one's fault this reduces the staff team at Warwick Chaplaincy.

1The hand of the LORD came upon me, and he brought me out by the spirit of the LORD and set me down in the middle of a valley; it was full of bones. 2He led me all around them; there were very many lying in the valley, and they were very dry. 3He said to me, ‘Mortal, can these bones live?’ I answered, ‘O Lord GOD, you know.’ 4Then he said to me, ‘Prophesy to these bones, and say to them: O dry bones, hear the word of the LORD. 5Thus says the Lord GOD to these bones: I will cause breath to enter you, and you shall live. 6I will lay sinews on you, and will cause flesh to come upon you, and cover you with skin, and put breath in you, and you shall live; and you shall know that I am the LORD.’

7So I prophesied as I had been commanded; and as I prophesied, suddenly there was a noise, a rattling, and the bones came together, bone to its bone. 8I looked, and there were sinews on them, and flesh had come upon them, and skin had covered them; but there was no breath in them. 9Then he said to me, ‘Prophesy to the breath, prophesy, mortal, and say to the breath: Thus says the Lord GOD: Come from the four winds, O breath, and breathe upon these slain, that they may live.’ 10I prophesied as he commanded me, and the breath came into them, and they lived, and stood on their feet, a vast multitude.

1A certain man was ill, Lazarus of , the and her sister Martha. 2Mary was the one who anointed the Lord with perfume and wiped his feet with her hair; her brother Lazarus was ill. 3So the sisters sent a message to Jesus, ‘Lord, he whom you love is ill.’ 4But when Jesus heard it, he said, ‘This illness does not lead to death; rather it is for God’s glory, so that the Son of God may be glorified through it.’ 5Accordingly, though Jesus loved Martha and her sister and Lazarus, 6after having heard that Lazarus was ill, he stayed two days longer in the place where he was.

7Then after this he said to the disciples, ‘Let us go to again.’ 8The disciples said to him, ‘Rabbi, the Jews were just now trying to stone you, and are you going there again?’ 9Jesus answered, ‘Are there not twelve hours of daylight? Those who walk during the day do not stumble, because they see the light of this world. 10But those who walk at night stumble, because the light is not in them.’ 11After saying this, he told them, ‘Our friend Lazarus has fallen asleep, but I am going there to awaken him.’ 12The disciples said to him, ‘Lord, if he has fallen asleep, he will be all right.’ 13Jesus, however, had been speaking about his death, but they thought that he was referring merely to sleep. 14Then Jesus told them plainly, ‘Lazarus is dead. 15For your sake I am glad I was not there, so that you may believe. But let us go to him.’ 16Thomas, who was called the Twin, said to his fellow-disciples, ‘Let us also go, that we may die with him.’

17When Jesus arrived, he found that Lazarus had already been in the tomb four days. 18Now was near , some two miles away, 19and many of the Jews had come to Martha and Mary to console them about their brother. 20When Martha heard that Jesus was coming, she went and met him, while Mary stayed at home. 21Martha said to Jesus, ‘Lord, if you had been here, my brother would not have died. 22But even now I know that God will give you whatever you ask of him.’ 23Jesus said to her, ‘Your brother will rise again.’ 24Martha said to him, ‘I know that he will rise again in the resurrection on the last day.’ 25Jesus said to her, ‘I am the resurrection and the life. Those who believe in me, even though they die, will live, 26and everyone who lives and believes in me will never die. Do you believe this?’ 27She said to him, ‘Yes, Lord, I believe that you are the Messiah, the Son of God, the one coming into the world.’

28When she had said this, she went back and called her sister Mary, and told her privately, ‘The Teacher is here and is calling for you.’ 29And when she heard it, she got up quickly and went to him. 30Now Jesus had not yet come to the village, but was still at the place where Martha had met him. 31The Jews who were with her in the house, consoling her, saw Mary get up quickly and go out. They followed her because they thought that she was going to the tomb to weep there. 32When Mary came where Jesus was and saw him, she knelt at his feet and said to him, ‘Lord, if you had been here, my brother would not have died.’ 33When Jesus saw her weeping, and the Jews who came with her also weeping, he was greatly disturbed in spirit and deeply moved. 34He said, ‘Where have you laid him?’ They said to him, ‘Lord, come and see.’ 35Jesus began to weep. 36So the Jews said, ‘See how he loved him!’ 37But some of them said, ‘Could not he who opened the eyes of the blind man have kept this man from dying?’

38Then Jesus, again greatly disturbed, came to the tomb. It was a cave, and a stone was lying against it. 39Jesus said, ‘Take away the stone.’ Martha, the sister of the dead man, said to him, ‘Lord, already there is a stench because he has been dead four days.’ 40Jesus said to her, ‘Did I not tell you that if you believed, you would see the glory of God?’ 41So they took away the stone. And Jesus looked upwards and said, ‘Father, I thank you for having heard me. 42I knew that you always hear me, but I have said this for the sake of the crowd standing here, so that they may believe that you sent me.’ 43When he had said this, he cried with a loud voice, ‘Lazarus, come out!’ 44The dead man came out, his hands and feet bound with strips of cloth, and his face wrapped in a cloth. Jesus said to them, ‘Unbind him, and let him go.’

45Many of the Jews therefore, who had come with Mary and had seen what Jesus did, believed in him.

Four weeks ago, when I was wondering what if anything I should give up for Lent, I could not have foreseen that by Mothering Sunday we would all have had to give up so much of what we had taken for granted in normal living.

After only a couple of days in complete lockdown, I am feeling the pressure. No longer the usual routines of church and social interaction. Already I miss them. The comfort of the Eucharist too. How I had taken it all for granted. Perhaps you feel it too?

Maybe that intensity of feeling is similar to that felt by Mary and Martha as they mourned their brother Lazarus. The person in whom they had put their trust – Jesus – had not come when they called for him. And now their brother was dead. It was at least another four days before Jesus came. All the ‘What if’ questions were probably still in their minds.

When Jesus asked for the stone to be removed from the entrance of the tomb, Martha was uncertain but managed to overcome her fear and put her trust once again in Jesus. The stone was removed, Lazarus was called forth and out he came, alive.

I am writing this on the Feast of the Annunciation, the day Gabriel came to Mary to tell her she would carry Jesus in her womb.He told her not to be afraid. At these very uncertain times, try to hold onto the God in whom we have believed for so many years, for he is our rock. Love, which is his abiding quality, is to quote Shakespeare, ‘the ever fixèd mark that looks on tempests and is never shaken’.

Coronavirus feels very much like a tempest. We don’t know when it will end and we are shaken by it. Some of us may succumb to it but I take comfort from the words of a famous hymn by Martin Luther. In the final verse of ‘Ein Feste burg’ (A safe stronghold), we sing

‘And though they take our life

Yet is their profit small.

These things shall vanish all.

The City of God remaineth.’

Almighty God, our heavenly Father, you promised to hear us when we pray in faith

At the beginning of this Passiontide season we pray that we may all grow closer to our Lord Jesus Christ, who gave us the will to be the servant of others, and gave up his life and died for us.

Lord in your mercy ……hear our prayer.

Gracious God we pray for all the nations battling coronavirus. We pray for their leaders that they may be granted the wisdom and the strength to meet the challenges. Lord we pray that your voice may be heard through your Church as it strives to overcome fear and self-interest in communities.

Lord in your mercy ……. hear our prayer.

Loving God, we pray for all key workers; for those keeping us fed; for carers of the vulnerable; for all those whose jobs involve risk, especially those in the medical services, doctors and nurses, and scientists in laboratories. Their dedication has never been more needed. May they know your guiding and loving hand in the weeks ahead.

Lord in your mercy …… hear our prayer.

Merciful God, we pray for all those who are sick at this time. May the light of Christ bring comfort, hope and a sense of your love. As the stresses of isolation and loneliness affect us all, remind us that we are in your hands and that we can still reach out to others in various ways.

Lord in your mercy …... hear our prayer.

Lord, you are with us always, among the dying, the suffering and the fearful. Give us the confidence to boldly meet any event in the days ahead.

Merciful Father accept these prayers for the sake of your So, our Saviour Jesus Christ. Amen.

This weeks Readings, Thought for the day, Intercessions etc ......... more