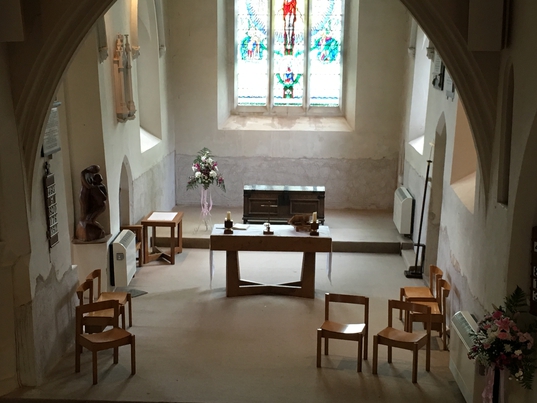 We are the Walsgrave Society of Change ringers.

Practice: 7:30 – 9:00 every Monday at St Mary the Virgin, the Parish Church of Walsgrave on Sowe, in CoventryCV2 2AW

We are always looking for new ringers of any ability, even if you have never rung before it is never to late to start. Visitors for practices and service ringing are most welcome. (Best to check ringing is on before turning up)

Please contact Bill Kelly by email (billkelly@talktalk.net) for more information or if interested in visiting. We are always looking to recruit more ringers of any ability even if you have never rung before.

The bells at this church were an unringable 8cwt 5 for many years until in mid 1980s when they were recast and rehung. A peal of Bob Doubles was rung on the bells in 23/4/1927. It was noted at this time that the ringing conditions were difficult, suggesting that for over 60 years the bells were in need of attention. You had to descend into a “pit” 10ft by 5ft by 6ft deep and there was no glass in the windows. The 4th kept trying to jump the wheel, the tenor was hard work and the treble was right in the corner and the ringer had to ring with his back to the rest of the band. The treble’s wheel is reported to have disintegrated during ringing for a ringer’s wedding in 1937.

The inscriptions on the old bells were repeated in facsimile on the new ones. One is “Harke doe ye heare our claperes want beer” and the other “Quantum suffiifit bibiere volo clancula vos a” – not easy to translate from Latin, but clearly a reference to the beer-drinking habits of bellringers!.

The fourth and tenor were William Bagley bells of 1702, the two remaining bells from a ring of 4. The existing treble was recast and a new treble was added by Taylor of Oxford in 1843. The third is a recast of the 2nd of the original 4 by Taylor of Loughborough in 1872. A chime barrel was added by George Worton of Coventry, who had previously hung the third and repaired the frame and fitting, in 1877.

The old frame was of late Seventeenth Century in date, built originally for four bells, with a square void in the middle. When the bells were augmented to 5 in 1843 the pit of the second bell was turned altered to accommodate the five bells. This frame was originally re-erected in the churchyard when the completely new installation was provided, but has subsequently had to be be demolished due to the activities of local youths in the churchyard.

The new H-frame and fittings are typical Taylors of the period.

There is an old post with 4 bell call changes on it in the tower that shows they were once an anticlockwise 4. It spells out the changes to ring Double Canterbury Minimus. See Chris Pickford’s article which is in Ringing World of 20/27 December 1985 pp.1078-80 for fuller details.

Details of the Bells

Details of the Previous Bells